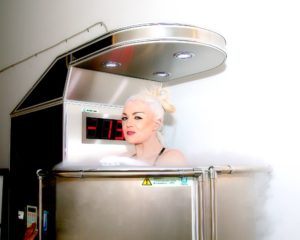 I love Cryotherapy – not only for its health benefits but it makes me feel ALIVE. It’s a staple in my biohacking routine — at least twice a week. You may think I’m mad but I really encourage you to try it yourself. AND the lovely guys at N2 Cryotherapy Calgary have agreed to give all Chemaine’s Model Helath tribers 10% off xo 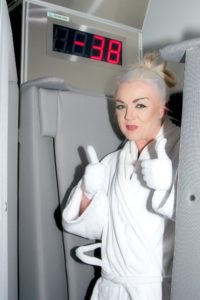 CRYOTHERAPY…..would you?
Ask I embark down this new path in my quest for total human health optimization – it’s about to get a whole lot COLDER like -140 degrees colder!
In the cryosauna, you are exposed to air vapor chilled by liquid nitrogen.Your body goes into survival or “fight or flight” mode.
Blood rushes to the core causing vasoconstriction in the skin, muscles, tissue and extremities.
Hormones and neurotransmitters like adrenaline and endorphins are released which reduce pain, elevate mood, stimulate the immune system and boost energy. 500-800 calories are burned during and after the session as the body reheats.
Vasodilation (the dilation of blood vessels, which decreases blood pressure) also occurs circulating fresh oxygenated, nutrient rich blood throughout the body reducing inflammation and accelerating healing.
The short hyper-cooling (-130 to -140 degrees Celsius) treatment —
* decreases inflammation of injuries and chronic musculoskeletal diseases
* manages pain
* increases fat burning abilities
* improves athletic performance,
* improves skin tone
* reduces signs of aging
* boosts mood and energy levels.