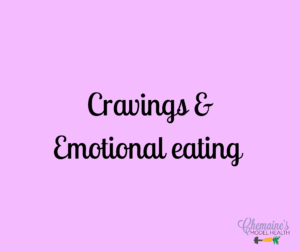 I wanted to compile a few of the posts I did on cravings and emotional eating on my Facebook page, in one place so I could direct my clients and followers to one place of reading, I really hope you all find this somewhat helpful and put some of the tools herein into practice!

There’s an aspect of health and fat loss that gets missed most of the time… ‘emotions’.

Most women experience emotional eating, men not so much, it’s a female thing unfortunately. Women are emotional beings, we are nurtures, we are care givers, we are feeders. We feed babies when they are born, when they cry it’s usually because of hunger so it’s natural to us to associate food with emotions right?!

So then when a woman is particularly unhappy, depressed and not satisfied in her life – she is more likely to turn towards food to make herself feel better or as a way to avoid negative emotions, than a man would. 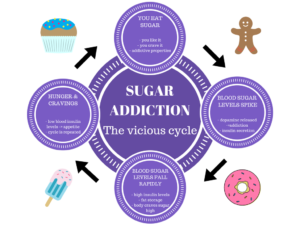 When we are stressed it looks a little like this;
Stress -> spikes cortisol and adrenaline -> causes the body to look for serotonin and dopamine to feel good and safe again -> sugar increases dopamine production making us feel good for a while. When the hormones drop, the cycle begins all over again, starting with increased cravings.

Poor sleep -> reduces available energy causing the brain to stress and malfunction -> the brain send out a signal to look for the fastest most easily absorbed form of fuel… sugar.

Seems pretty obvious but most people when they have uncontrollable eating or cravings don’t stop to reflect on what’s going on inside them or what’s driving this. So let’s look again… what are some more things that drive up cravings and emotional eating 🍽

That leads us to the ’emotional level’.

It has been recognized that there are certain feelings or emotions that connect to cravings of certain foods, being aware of this can help you understand your cravings better and better deal with your emotions.

They are as follows;

Studies suggest every food corresponds to a certain mood or emotion. In 1982 the American university professor Bernard Lyman asked 200 people to imagine themselves experiencing various emotions, including anger, loneliness and joy, and at the same time asked them what food they’d like to eat.
They indicated strong preferences for desserts when feeling happy and loving, but when anxious they wanted snack foods, both of the healthy and junk variety.

Each food is craved because it has amino acids, neurochemical catalysts, or vasoconstriction catalysts, which will energize your body or soothe your brain chemicals, making you feel better ‘for a short time’.

How to assess your sugar or junk food cravings.

We crave sugar for three reasons:

1️⃣ When we need more motivation/dopamine/self-worth
2️⃣ When we have depleted our energy sources
3️⃣ When we feel stressed or unsafe.

So next time you reach for a cookie or chips – check in and ask yourself:

There is a neurological, biological, and emotional basis under our cravings.

There are also some nutrient and mineral deficiencies that have been connected to emotional eating….

These vitamins have also been associated with feelings of sadness, anxiety and shaking or tremors.

So staying on top of our bodies nutrient needs is going to benefit us on many levels but also help us manage cravings and emotions a bit better.

This post was compiled to help you reflect on what might be driving your cravings and emotional eating. I hope you find it somewhat helpful. One book that I highly recommend if you want to delve more into the world of emotional eating is “Constant cravings” by Doreen Virtue. Its a good read that gives lots of insight into why we may be craving a certain food. 🙂

Why we want to avoid fat and carb combos

Aw man I really feel like the bad guy when I tell people to avoid doing this if health and fat loss is their goal but in my defense, I say it to help people. 🙂

I have spoken about this before but it’s time to help you really understand WHY, a bit more in depth.

So for us to first look at this topic we must first understand what ‘lipopolysaccharides’ are.
Lipopolysaccharides or LPS are bacterial toxins that can cause inflammation and a host of other health issues, and they’re normally housed in the gut, but they can become toxic if they enter the blood through infection or through a leaky gut. LPS’s are also found on the outer membrane of gram-negative bacteria, including things like E. coli and Salmonella. We all have some amount of LPS in us but how healthy you are can depend on the amounts you have.

So, you can get a ton of LPS’s if you are infected with a bacteria or parasite or have a terrible diet. And these LPS’s can really induce a host of inflammation, damage cells and drive dis-ease in the body. Studies have found is that a high saturated fat diet can significantly increase LPS levels. And in addition to that, if the saturated fats are consumed in the presence of a high amount of carbohydrates, particularly starchy or sugary carbohydrates, a so-called high-fat, high-carb meal, LPS levels can skyrocket.

Studies have also compared high-fat, high-carbohydrate meals that are derived more of plant origins, like monounsaturated fats from extra virgin olive oil. And we don’t see that elevation in LPS’s anywhere near to the extent that we would see them after a meal rich in saturated fats and carbs. There is still an elevation but not as much. 🧐

Well, don’t hate me now, it’s just science and how biochemical reactions can happen in the body.
Foods that carry a 1:2 ratio of fat to carbs have a synergistic effect on the brain that results in a very noticeable dopamine release in the same neural pathways that respond to addictive drugs. So these are literally extremely hedonistic (in a junk food binging sense)!
Foods like; ice caps, mochas, lattes, milkshakes, ice cream, pizza, macaroni and cheese, avocado on toast, grilled cheese, donuts, cinnamon rolls and milk chocolate….are all what could be called ‘adult breast milk’ or ‘sweet fat’.
Adult breast milk has that 1:2 ration of fat to carbs and what do we use it for? Yep to make babies grow fat and fast. Well these sweet fat foods do the same.
What else do these food combinations do? We know that the pleasure centers in the brain are highly, highly triggered by these foods and that’s why they make us feel good and cause us to crave them. We know this combination contributes to poor health. But what else, what about their effects on fat loss?
Well…. the insulin response we get from the carbohydrates, turns off fat burning and enhances your ability to be able to store fat from BOTH the fat and the carbohydrates. So, unless you’re in a calorically deprived glycogen depleted state, most of that is going to get stored as fat. True story. We get an insulin spike from the carb and we also get an indirect insulin spike from the fat and store even more fat. So that’s a double whammy of insulin and its damaging effects.

Also when you process carbohydrates in your gut in the presence of fats —> the fat creates a coating around the carbs and they both travel around the body delivering inflammation, oxidation and glycation (which causes aging and tissue damage). So the fat gets used as a delivery system for the carbs which become inflammatory in your bloodstream 🤓

Another thing to note is that fats and carbs can be fine to be eaten in isolation but what happens is; when you process carbohydrates in your gut in the presence of fats —> the fat creates a coating around the carbs and they both travel around the body delivering inflammation, oxidation and glycation (which causes aging and tissue damage). So the fat gets used as a delivery system for the carbs which become inflammatory in your bloodstream.

So, based on the research, we can categorize which high-fat, high-sugar meals would probably be most deleterious to you. Just from a pure inflammatory and lipopolysaccharide standpoint — we know that any high-fat, high-sugar/carb meal is bad news if you’re trying to lose weight, specifically body fat. It induces storage of most of those calories as fat. And these LPS’s damage the gut and drive up illness and disease.

All is not lost though… let’s say you’re at your normal stabilized weight, your lean or have a nice amount of muscle and you’re not concerned about weight loss, you’re relatively insulin sensitive, you exercise on a frequent basis, you have moderate to low-level physical activity during the day, your health biomarkers are excellent…well if you’re were going to have fat and carbohydrates at the same meal (which makes that meal very enjoyable because we know you get the dopamine production from that)…you would choose a monounsaturated fat source like extra virgin olive oil or olives, in a small amount, paired with more of a healthy kind of Mediterranean or Paleo type carb source.

With all this taken into consideration — we now understand why we keep things like cream cakes, pizza, ice cream and ice caps etc to once a week or less. 👍 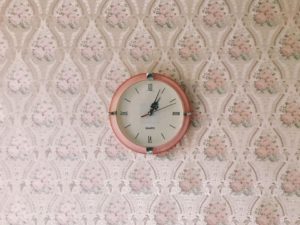