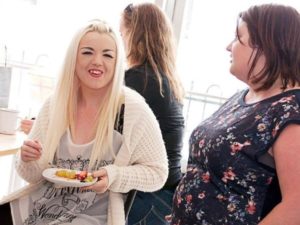 Why do you get food cravings around your period? Inappropriate carb loading with chocolate cake, pizza and other assortments of ‘not the best choice’ foods. Don’t be coy, we all do it! This question drives me, my clients and pretty much every woman I know crazy every month! But there are answers — reason to this madness! Read on to find out xo

Many women ditch their diets and struggle to say no to junk food around period time. We shamelessly swap our Lara bars for a slice of chocolate cake, a bowl of pasta, or both to satisfy our ravenous appetite for carbs. A study published in Annals of Endocrinology suggests food cravings before our period are triggered by fluctuating levels of hormones, including estrogen and progesterone, and may lead women to eat 500 extra calories per day. HAHAHA who are they kidding – more like an extra 1500 calories a day!

These craving for carbs re triggered by the brain, not our taste buds. For example, carb craving around period time is a signal we need to eat something sweet or starchy, because the brain needs to make serotonin or our happy hormone. Typically, this food craving is accompanied by a bad mood. You know what I’m talking about. Studies have shown that when people have an urge to eat carbs, they’re usually stressed, irritable, angry, depressed, or tired, among other things. These moods are reflective of a change in neurotransmitters or signaling in the brain.

Researchers from the National Institute of Nutrition and Food Technology in Tunisia looked at whether a change in diet before menstruation is linked to fluctuating serotonin levels and mood swings. A total of 30 healthy women between the ages 18 and 45 were monitored for changes in hormone levels, calorie intake, and weight. They found that between day one to three of the “follicular” phase, or menstruation, the women consumed an average of approximately 1,700 calories a day. However, in the three days leading up to menstruation, the women ate an extra 500 calories a day. More than half of the increase in calories was due to carbohydrates, usually from snacking. Women gained 0.66 pounds more before their period than while they were ovulating.

Also, changes in estrogen and progesterone levels are known to affect serotonin levels, which in turn affects mood swings and cravings. Oh thank god it’s not all my fault!

So when your serotonin levels are low during the late “luteal” phase, or right before your period, eating foods high in sugar/carbs will lead to a spike in serotonin and dopamine (another feel good hormone) levels, boosting our mood and making us feel better, according to a 2003 study in PNAS.

The truth is that these cravings are a chemical reaction that you have some but not all control over. When you brain craves sugar as to increase serotonin production, it will haunt us until we give in. Which can also make us feel like we are a failure and thus the cycle goes again as we turn to more food for comfort. BUT you do have control of the carbs you choose to eat — I go over carbs in more detail and what are the 10 Chemaine’s Model Health approved carbs in The HETA guide.

The moral of the story is; if you do have some extra sugar around PMS time, don’t beat yourself up, the brain wants what the brain wants, but do try go for upgraded sugars that won’t slow down your health or weight loss goals as much 🙂