Molecular hydrogen and why I am its biggest fan!

Lets look at ‘Molecular hydrogen’ or as I like to call it “the angel molecule”… because this little molecule is so powerful, yet gentle at the same time… it must have been created by angels or some higher power. 😉

I started using molecular hydrogen in early January 2020 after I got an abnormal PAP diagnoses, where my doctor and gynecologist expressed concerns that my cells were high risk pre-cancerous cells and there was a high chance I would need a biopsy and LEEP (loop electrosurgical excision procedure). Of course being a mom of two and a young woman with my whole life ahead of me, I panicked and quickly delved into all the science and studies I could find relating to abnormal cells.

I am the first to admit that I am obsessed with my health, my family say “over the top” and I agree I can be a bit anal. But in my defense it is very important to me to be my best and strongest, so I can live my best life and be my best for my loved ones and people around me. Anyways, my doctor and gynecologist both said things that stood out to me and I grasped onto them as my lifeline, and as the driving force for me to reverse my diagnosis. My doctor said “your cells are very inflamed” and the gynecologist said “in rare cases we have seen a women’s immune system to be strong enough to flush out cancerous cells”… that was all I needed! I heard inflammation and that there was a chance!

I was like, “hold on, I am a biohacker and I know lots about inflammatory cells and how to hack them, and… I know how to boost my immune system and induce autophagy to help flush out damages cells!” So off I went, I had a mission and I was damned if I was going to let something like this beat me!

I have spoken about inflammation lots with my clients and followers. And I am well aware that I train very hard, and that combined with my strong work ethic, supporting hundreds of clients and trying to raise two growing boys has effected me on a cellular level and caused me to feel extreme inflammation (and exhaustion at times). For months I had not been sleeping well, my hands and face would get very warm and swollen, my blood pressure increased, my throat would swell up so much that I could feel my esophagus  and chest getting tight, I constantly had headaches, irritability and just wasn’t myself. I was so inflamed that some evenings I couldn’t even look at my phone or think straight… So I guess that’s those inflamed cells the doctor was talking about eh?! 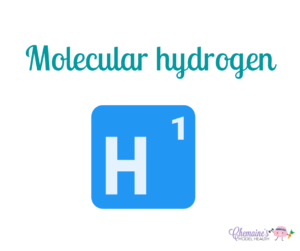 Among the many things I implemented, molecular hydrogen is the one thing I believe had the biggest impact! I had heard of molecular hydrogen many times over the past 2 years and came across it again when doing my research on deuterium water.

So I started looking more at studies coming out of Japan and from Dr. Ohta and Tyler Lebaron. I also looked at work by Robert Slovak and Alex Tarnava. Who are all well renowned for their work around water and hydrogen. Needless to say, what I uncovered blew my mind!

So what is molecular hydrogen?

Well Hydrogen as we see it on the periodic table of elements is expressed as ‘H1’ and is the smallest lightest atom in the universe, as well as the most abundant. The Molecular Hydrogen, commonly written as  ‘H2′, is a molecule formed by two hydrogen atoms that share their electrons. It is also incredibly small which is where it’s magic comes from! Because it is so small it can penetrate into every tissue and cell in the body with ease. Hydrogen is inert (meaning it is stable and unreactive), very safe and is able to penetrate right through the membranes of our cells, which most other substances can not do. Molecular hydrogen is hydrogen it its gaseous form.

There is an abundance of studies on hydrogen and its benefits on mitochondrial health, cellular health and overall health. Hydrogen functions on the regulation of gene expression. Its most potent effects can be seen on inflammation and energy production.

One area of study is hydrogen’s effect on ‘oxidative stress’, this is where stress damages cells and DNA due to an imbalance between free radicals and antioxidants in your body (caused by acute and chronic stress, toxins, excess sugar and trans fats). An abundance of oxidative stress is where we see chronic inflammation, poor blood flow and disease occur. When we look at hydrogen we see it is a very strong anti oxidant that when consumed, immediately starts to work on supporting the mitochondria and bringing down inflammation by distributing throughout the body withing 10 minutes and staying there for up to 24 hours.

Hydrogen has a direct connection to the regulation of autophagy too. Which is the body’s way of cleaning out damaged cells, in order to regenerate newer, healthier, stronger cells. Which is one of the ways hydrogen has been shown to help with Alzheimer disease and dementia.

Hydrogen rich water or HRW has been shown to improve mitochondria function and energize the cells/body, improve blood flow and circulation, and improve skin tone, moisture and health, so much so that hydrogen beauty bathing and hydrogen beauty spas are very popular in Japan.  Molecular hydrogen has also been shown to improve hormonal function and psychological stress in mice and in humans!

This study out of Europe published in April 2019 shows how hydrogen rich water was effective at reducing NAFD or non alcoholic fatty liver disease. And this one out of Harvard Medical school and Bostons Vhildrens Hospital in 2019 showed “Inhaled hydrogen could protect the brain during heart-lung bypass” in newborns!

This conclusion from a study published in 2016 “Molecular Hydrogen Therapy Ameliorates Organ Damage Induced by Sepsis” , I hope, would be the convincing factor on if one should try molecular hydrogen or now….

It is believed that hydrogen will be the next area of Nobel Prize winning in the future.

I could go on and on with the study references for the efficacy and benefits of molecular hydrogen or hydrogen rich water (HRW) but back to my own story… On February 11th 2020 I attended a Calgary women’s clinic to have a ‘colposcopy’ and ‘biopsy’ performed, this was 3-4 weeks after I started HRW and other health supporting protocols on hopes to rid my body of these so called “pre-cancerous cells”. I did a meet and greet with a clinic nurse for about 40 minutes who, just like my doctor and gynecologist, told me to expect the worst and that from my PAP my cells looked very high risk and I was likely going to need a LEEP.

So I go in to the doctor, she proceeds with the colposcopy and a takes a cell sample from higher in my cervix… pushes her chair back and says “that’s it, I am not doing any more, there is nothing here, your cervix looks perfect”. I asked her twice “so your saying my cervical cells had zero reaction to the acid mix?”… she said yes and that I was good to go, nothing to worry about. And that she would let me know when the cell sample came back … she said the reason she took a cell sample from higher in my cervix was to see where these abnormal cells came from on my PAP.

Now… I’m not saying molecular hydrogen ‘cured’ me but I am saying I haven’t felt this good since before I started drinking HRW and my inflammation is non existent, literally no symptoms or energy crashes since my first glass of HRW! I do feel it played a part in my healing protocol and I will continue with it for the foreseeable future. I really hope if you decide to try molecular hydrogen that you reap the benefits I do!

I currently also have some clients taking molecular hydrogen for inflammation, gut health and overall cellular health…the feedback has been positive so far. I will edit this blog as more information and results come forward.

If you watch the science and medical health space, you will see hydrogen as a medical tool is getting more popular by the day, again that’s because of its safety and effectiveness.

There are two types of molecular hydrogen I use and have had my results with… one is made by  Robert Slovak with Water and Wellness which I get here, I have ordered off their website but unfortunately the exchange rate and import fees for Canada are very high! And the other is made by Alex Tarnava and Dr. Richard Holland at Drink HRW and I get it here. Both are very effective and I advise you try both brands and monitor which you feel the benefits from most, then stick with that one.

For optimal results, you would  drink hydrogen rich water 2 – 3 times a day, and you do this by adding 1 tablet to 250 ml of clean room temperature water. As soon as the tablet is dissolved, you want to drink the whole glass as quick as possible, so as to not lose too much hydrogen into the atmosphere. Check out this video for exact instructions!

*Side note; it is advisable to ‘cycle’ molecular hydrogen and the healthier you are, the less you will feel a difference but that doesn’t mean it is not working or benefiting you!